One of the most amazing things about the Quest and Dare to Excel challenges have been the people I’ve connected with. People whose words and work inspire and amaze me. People who have expanded my way of thinking and broadened my horizons. But this whole journey has also re-opened my eyes to the likewise impressive people doing great work outside of the current quest.

Champion someone else’s work in public. Identify someone whose work you believe in and want to acknowledge specifically and genuinely in public online.

That someone may be a colleague you’ve connected with in our forum. It might be a team member. It might be one of your customers, clients, or participants who has done heroic work in line with what you and your brand Story are all about.

It might even be a perceived competitor – someone who shares members of your audience.

Do It Together. It’s exponentially more fun and effective. And it’s business as unusual

I’ve mentioned many of the names listed below on this blog before. I’ve also shared them on Facebook, both on my timeline and in groups I belong to, and mentioned their work in many conversations. But for those of you who don’t want to dig back through months of posts to find them, here is a handy reference list. My life and work has evolved in a truer direction due in part to their presence in our shared quest to embrace our truest work and walk what could otherwise be a lonely path.

There are, of course, many more, and you will see them, too, as I continue to share the work that inspires me, on this blog, on social media, and in person.

We live in an experience economy. Your customers and audiences don’t want products and services. They want experiences. Leaders who live with integrity and artistry build businesses that deliver on delightful experiences – regardless of what product or service they sell.

Define and act upon one way you can design to delight your audience or customers within the next two days.

My book is still in its beginning phase. There is nothing yet to read or see… But, wait, that’s not actually entirely true. In fact, I’ve already shared a piece of story-inspired collage art in my previous post that has already delighted one of my readers. So, inspired by that and by a conversation with fellow quester Brenna Layne, I will create a page on my site featuring this image (and others I create along the way) as well as a reading list, and perhaps other related references, resources, videos, whatever I can find to help keep me and my potential future readers excited about the project. And I already have other extension projects in mind–quilts, poems, maybe even an opening signing at a gallery filled with this related work… so many possibilities!

And while we’re on the topic of delight, I think this year I’ll send holiday cards to the people who have bought my quilts. It doesn’t take grand gestures to create a little delight in the lives of those who support us.

At the intersection of Creative Work and Learning lies a space that invites experimentation, trying new things, getting our hands dirty. A space I like to call play. It’s where we explore those things that sound intriguing, that grab our attention, that make our ears prick up, or our hearts skip a beat. The things that we suspect with little or no experience or knowledge, might just be meant for us. It’s also where we give ourselves the freedom to do those things that just plain make us happy. 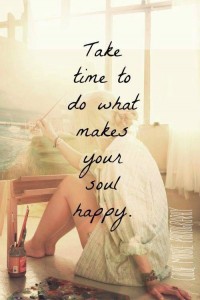 It’s improbable that I’ll get to all or possibly even any of them, but the mere existence of this list makes me excited for the new year. And since I plan to add more ideas as they come up, I will probably be even more excited as the year goes on.

In this 12th and final prompt of Quest2015, Scott Dinsmore of Live Your Legend asks:

Do the people around you inspire possibility? If not, it’s time to  make some changes. The fastest way to do the things you don’t think can  be done is to hang around people already doing them. In 2015, what changes will you make accordingly?

One of the downsides of being an extreme introvert is that, on a day-to-day basis, there really aren’t that many people around me at all. And because of that, I’m going to answer this prompt backwards, starting with “In 2015, what changes will you make accordingly?”

I’m going to do a better job of connecting with the amazing and inspiring people I know and have drifted from.

And I am going to do my best not to drift from the amazing and inspiring people I have met here in my no longer quite so new home state and through Quest2015.

How? By asking who I am missing and what I can do to remedy that. By making a list and checking it regularly. By reaching out, through social media, telephone, thoughts. By gathering addresses, buying stamps, collecting cards, and stationery, and sending them out.

But more than that, by carrying them with me–their words, their hearts, their images. And from some of them, directions to help me find my way back when I lose sight of this winding path.

So in answer to the first question: Yes, though they may be scattered throughout this country and beyond, they do.

I have a quilt on my board that’s been there for months. Okay, to be honest, I currently have six quilts on my boards in varying states of completion, but this one feels different. I sketched the design and selected the primary fabrics back in February, and cut out the background, backing, and key elements in March, but have made not a stitch of progress since then, and that’s getting to me. And it seems the longer I stare at it, the harder it is for me to figure out how to get it back on track.

One the one hand, it’s already a success. It served as inspiration for my 2013 SAQA donation quilt, Superpower: Flight! (see it and other auction quilts here). Still, though, I can’t seem to let it go, and not just because it’s a key piece in my November show. It begs to be finished. I just haven’t known how. Then, a couple of weeks ago I went with a two friends to the Museum of International Folk Art to see the “Plain Geometry: Amish Quilts” exhibit and while we were there we popped in to see another exhibit of Japanese kites.

I didn’t think too much more about it until a few days ago when I looked up at my board and saw the sad Flight fabric longing to live up to its name and new what had been missing. It didn’t want to be just another static rectangle. It wanted to soar.

Since then I’ve been arguing with myself. Do I really want to redesign it? Do I really want to start from scratch when the fabric is already cut out? Wouldn’t it just be easier to just finish what’s already up there? Yes, it would, but also, no, it wouldn’t. If it was that easy I would have been done in March when I started it. So now it’s back to the drawing board to re-imagine Flight as a kite.