Today’s Quest2015 prompt comes from author Seth Godin, though to call him just an author doesn’t really do his work justice. According to his bio “He writes about the post-industrial revolution, the way ideas spread, marketing, quitting, leadership, and most of all, changing everything.” If you haven’t read his work yet, I highly recommend it. I am looking forward to getting my hands on his new book, What to Do When  it’s Your Turn (and It’s Always Your Turn).

Who would miss you if you were gone? If you didn’t show up to work, didn’t send out that newsletter, didn’t make that sales call, didn’t tweet that tweet… who would miss it? How does your answer shape how you’ll live out 2015?

I have rewritten my response to this prompt at least three times. Once focused on the people and their words about what they would miss about me. Once turning away from the original prompt to obsess about why they would miss me and what that might reveal about the path I should be pursuing. And once about the different ways I would be missed and what it might reveal about my relationships. 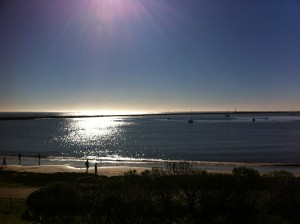 Until finally, after a long lunch at the ocean with a small assortment of family members, I wrote this:

I started blogging about Seth’s prompt as soon as I read it first thing this morning, but as I wrote I seemed to get more and more lost in tangents, more and more distant from what I was trying to figure out. I got distracted not by who, but by why. What would they miss about me, as though that held some important seed of what I should be doing with my life. And maybe it does. But when I read Kate Arms-Roberts‘ response to this prompt, I realized that there is something even more important. That there are two categories of people who will miss me: the people with whom I have forged deep connections, and the people who want something from me. That second group includes the quilt guild members who “need more of my energy around them” (according to the guild president), the freelance boss who calls me only when she has a project with an impossible deadline because she knows I will always find a way to get it done in time, the neighbor who needs help with an auction site. And in the first group? My boss at the Sewing Center who loves to spend our lunch hours talking about books, creativity, dreams (who happens to be lurking somewhere out in Quest land–I’m still waiting for her to speak up). The neighbors who still thank me for the quilt I made for a neighbor who died recently of cancer–a quilt that they all signed, giving them each a way to act in the face of help- and hopelessness. The would-be writers who believed me 12 years ago when I stood up in the front of a first-time National Novel Writing Month group and told them they could write a novel, several of whom are now published authors. The ex, still in tech, who tells me he is in awe of my bravery for dropping out of corporate life to pursue simplicity, art, and poetry. And maybe in there is the why… maybe it’s not about what I do, but about standing up and being who I am. In fighting every day for this life I have chosen and in doing so, proving that they can, too. And maybe it doesn’t really matter which path I choose–quilts, poems, an apocalypse garden–so much as having the conviction to walk it, with all its pain, and beauty, and magic. Maybe it’s the being, not the doing that matters most.

So how will this answer shape how I’ll live out 2015? By allowing me to stop wasting so much time worrying about which to-do items matter most, and start focusing instead on being who I am, in all its varied, distracted, and floundering glory. By reminding myself that it’s the process that matters, and the people you really connect with along the way, not the goal at the end. ‪